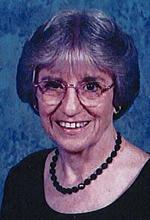 A service and receiving will be at 12pm Thursday, October 1, at Wilkinson Funeral Home with a private burial to follow.

Betty was born on December 1, 1937 in Cabarrus Co. She was the daughter of Robert A. and Louise Barbee Easley. She was an active member of the Baptist faith. She was a longtime supporter of the Harrisburg Lions Club. She was preceded in death by her husband, Robert “Bob” Marsh; daughter, Vicki Faggart; and granddaughter, Jenna F. Holder.

Mrs. Marsh is survived by her great granddaughter, Miss Cassidy Bell Holder.
Memorials may be made to the Harrisburg Lions Club, 507 Patricia Ave. Harrisburg NC 28075. There will also be a collection drop box for used eyeglasses at her service to honor of her years of collecting glasses.