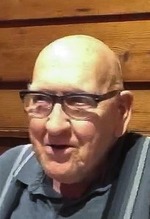 Family and friends are encouraged to come by the home, but at this time there will be no formal visitation. A Memorial Service will be held at a later date.

Clarence was born on August 2nd, 1938 in Rowan Co. to the late Albert Keller Cook and Myrtle Mae Pless Cook. He is also preceded in death by his brother, Albert “Paul” Cook.

Clarence was a Veteran of the U.S. Air Force where he learned skills to prepare him for his 27-year career at AT&T as a microwave technician. After retiring from AT&T, Clarence decided to go back to work for another 25 years at the Hospital. He was a longtime member of New Gilead Reformed Church and loved anything to do with the outdoors: from fishing to chopping wood, he enjoyed being outdoors. He also enjoyed going to auctions and spending time with his family, reading and watching Fox News.

In lieu of flower, memorials may be made to one of Clarence and Kay’s favorite charities: Samaritan’s Purse, PO Box 3000, Boone, NC 28607.

On-line condolences may be left at www.wilkinsonfuneralhome.com
Wilkinson Funeral Home is assisting the Cook family.