To share your memory on the wall of Louise Weaver, sign in using one of the following options:

Print
Catherine Louise Roberts Weaver, 88, went home to Glory on Saturday, June 13, 2020. A native of Mecklenburg County, Louise moved to Concord with her family in 1941.

The youngest child of John Ligon and Kyree Sloan Dilling Roberts and si... Read More
Catherine Louise Roberts Weaver, 88, went home to Glory on Saturday, June 13, 2020. A native of Mecklenburg County, Louise moved to Concord with her family in 1941.

The youngest child of John Ligon and Kyree Sloan Dilling Roberts and sister of the late JL Roberts, Jr., Betty Jean Roberts Bost, and Harry Thomas Roberts, all of whom she adored. Louise assumed the role of family archivist! She catalogued their lives and telegraphed the happenings of each to the others.

She is survived by her devoted and loving husband of 61 years, Horace Lee Weaver, and three children who were the light of her life: Anne Elizabeth Weaver Tidwell, (Daniel), of China Grove, John Lee Weaver, of Kannapolis, and Alice Louise Weaver, (Joseph), of Spartanburg, SC, and a number of beloved nieces and nephews!

Louise was an active member of her church, Central United Methodist, where she sang in the choir for decades. Additionally, she belonged to the Houston Tuttle Circle, chaired the Decorating Committee, worked tirelessly with the United Methodist Women and served on the Board of Wesbury Residence.

A passion for Missions was a lifetime commitment. Her job as a teacher in the Cabarrus County Schools Home Start program inspired her to look for solutions to obstacles these families faced on a daily basis. Louise, along with her minister at Central United Methodist, Garland Young, and church leaders from other denominations, forged ahead to establish the Cabarrus Cooperative Ministry in 1981. In 1983, she received the Governor's Community Award for her leadership in forming this ministry and serving as its First Board Chairman. Louise kept this organization close to her heart for the next 39 years.

At age 60, and always possessing the keenest sense of adventure, Louise got up one morning and said to her family: It's never too late to embark on a new career; I'm going to be a decorator! And so she was, for the next two decades! Houses and businesses in the surrounding three counties display her taste and flair.

She loved fashion and prided herself in being on the cutting edge of new trends. You never saw her without makeup and accessories. This was her signature! Louise embraced technology and became an avid FACEBOOK and INSTAGRAM user! She never looked 88 and certainly never acted it!

Louise had a zest for life unequaled. Her warmth was legendary. She embraced each day with great passion; what could happen TODAY?! The possibilities were endless. Adoring people, she was a cheerleader, a guidance counselor, and a friend to hundreds, carrying happiness by the bushelful wherever she went.

Spirituality was paramount in her life. She had a deep and abiding faith, never wavering in that commitment. God goes before us was her catch phrase. She ardently believed this and lived with that confidence each day. Louise was a beacon of light to those lucky enough to inhabit her world.

A graveside service will be held at Carolina Memorial Park on Thursday at 10. A Celebration of Her Splendid Life will be held at Central United Methodist Church when it is safe to do so.
Memorials may be made to the Mission Fund at Central United Methodist, 30 Union St. N,
Concord NC, 28025 or to the Cabarrus Cooperative Ministry, 246 Country Club Drive NE, Concord, NC.
Read Less

To send flowers to the family or plant a tree in memory of Louise Weaver (Roberts), please visit our Heartfelt Sympathies Store.

Receive notifications about information and event scheduling for Louise

We encourage you to share your most beloved memories of Louise here, so that the family and other loved ones can always see it. You can upload cherished photographs, or share your favorite stories, and can even comment on those shared by others.

Jeffrey S. Jones, Gregg and Ana Blanton, and other have sent flowers to the family of Louise Weaver (Roberts).
Show you care by sending flowers

Guaranteed hand delivery by a local florist
B

Posted Jun 20, 2020 at 03:03pm
Weesie, as I called her, was my IDOL! I always told her I wanted to be just like her when I grew up! I admired her zest for life and her ability to always look so amazingly beautiful no matter what time of day it was or where she was going! Beautiful inside and out, I could only hope to be at least a tiny bit like her!
Comment Share
Share via:

I always enjoyed hearing all of the Louise and Horace stories from Alice. What a wonderful tribute to your mom. She was a firecracker. Blessings of peace to all of you as you navigate this new normal.

Posted Jun 17, 2020 at 03:03pm
Louis and Horace were the first people to welcome my wife and me when we moved to the Beverly Hills neighborhood. She was a wonderful person, I am so sad to learn of her passing. My condolences to Horace and the family. Rick and Marica Kraus
Comment Share
Share via:
HS

Blooming Garden Basket was purchased and planted a memorial tree for the family of Louise Weaver. Send Flowers

Posted Jun 16, 2020 at 04:38pm
I will always remember her sweet smile and the sincere warmth I felt in her presence. Her light continues on in the hearts of her special family. Peace. Char
Comment Share
Share via: 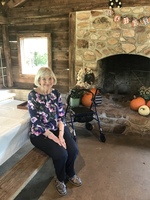