To share your memory on the wall of Ray Safrit, sign in using one of the following options:

A funeral service will be in the barn at his family farm at 3 pm, Friday, Feb 5, 2021 located at 1639 St John's Church Road, Concord, NC 28025. The family will receive friends in the granary from 12-3pm; funeral to follow. He will be laid to rest at St John’s Lutheran Church, Concord, NC. The family understands that friends and family may not be able to attend the service, so they have requested that you share a story of Ray on the Wilkinson Funeral website. The Funeral Service will be live-streamed on the Wilkinson Funeral Home Facebook page, starting at 2:45 pm.

Born Oct 26th, 1932 to the late Grover White Safrit and Grace Beaver Safrit, he was one of 5 children. He was proceeded in death by his four siblings, Helen, Lula, Glenn, and Joe; a son, Stephen; and a granddaughter Casey.

Ray served in the US Airforce, stationed Thule Greenland and Cocoa Beach Florida, where he met his life long friends. He was a letter carrier for the US Postal Service in the city of Concord, NC for 43 years. At Christmas time he would have his family shop/deliver a box of food/toys to people along his route that he knew were in need of a Christmas blessing. He always watched from afar, as these people’s received a special gift from an unknown stranger. He earned the One Million Mile Club award for safe driving from USPS. He also worked for the Cabarrus Hospital.

He was a godly man and helped establish 4 new starter churches. He loved to listen to the Mormon Tabernacle Choir every Sunday morning while eating breakfast, but organ music was his favorite, especially the pipe organ. He wore his Sunday best to church but preferred coveralls, a straw hat, and pull over boot to anything else.

He was a cattle farmer and the 1st one to own Beefmaster cattle in NC. He grew a garden large enough, that he had more than he could give away. Many a day he worked a full schedule, only to come home to farm, sometimes into the wee hours of the night. He was active in farm into his 80s and enjoyed his recliner where he would fall asleep watching TV.

He loved to watch sports on TV and was a baseball pitcher at Mt. Pleasant High School, where he made the sports page for his no hit games. He loved the mountains and spent many weekends and vacations there when his children were growing up. He loved to travel with family and friends and visited 49 states in his lifetime.

He was a wonderful and loving husband, father, grandfather, and great grandfather to his family. Most folks he knew considered his as their father or grandfather.

The family would like to thank all the hospital staff for making sure my mom got to see him while they were both there at the same time. And everyone who made it possible to grant his last wish to be at home with his family. Thank you also to the hospice staff who attended him.

To send flowers to the family or plant a tree in memory of Ray Beaver Safrit, please visit our Heartfelt Sympathies Store.

Receive notifications about information and event scheduling for Ray

We encourage you to share your most beloved memories of Ray here, so that the family and other loved ones can always see it. You can upload cherished photographs, or share your favorite stories, and can even comment on those shared by others.

Posted Feb 05, 2021 at 01:53pm
Uncle Ray was a GREAT Man, Husband, Father, and Uncle. I cherish all our memories together at the farm always loved the homemade ice cream every time we visited.

So many memories with all the family at Grandma's Sunday Dinners.

I'll never forget all the teasing that the "Yankees" came to visit. We loved him and he loved all of us.

He will missed - sending love and prayers to all the family.

The cows remind me of how my Dad and Uncle Ray always got together to call the cows in for supper. My Dad so enjoyed those times.
EM

Posted Feb 05, 2021 at 01:23pm
Eric and Cherry Mullis
Ray was a true man of God. We loved hearing him tell stories of his adventures with Phyllis. You could always see the love in his eyes. He will be deeply missed. We pray for Phyllis, Danny, Jordan, and the rest of the family.
Comment Share
Share via:
HW

Posted Feb 05, 2021 at 01:21pm
So sorry to hear of Ray's passing. and pray for Phyllis's speedy recovery. I have known him since he was delivering my parents mail in Concord many years ago and from being a hard working neighbor on a John Deere tractor day or night always willing to help someone in need. Ray was a good Christian that always had time for a conversation. Danny, Phyllis and Jordan my prayers are with you. I know how close your family is and may the lord help ease your sorrow.
Comment Share
Share via:
RR

Posted Feb 05, 2021 at 05:31am
I knew Ray for many years and have to say he was perhaps, next to my dad and grandpa, undoubtedly the best man I’ve ever known! I’ll remember him for his passion for loving The Lord, his family, his church and his many friends...and without hesitation he would always make himself available for anyone of them should they be in need of anything. He was man who had such wisdom on life and was one of those people who you could just sit out on the porch while listening to him share his stories all day...just an all around good man! Danny shared with me on his Dads passing “Dad went on to greener pastures.” There’s no more a truer statement than that...for he truly knew his Savior!
Comment Share
Share via:

Posted Feb 04, 2021 at 09:47pm
We have many years of wonderful memories of Ray and Phyllis and their family. We love them all and will miss Ray. He gave us vegetables while we went to seminary along with Phyllis' famous canned food. They also took us out to eat a lot and loved on us like we were their own children. He was a dear friend that we could depend on always. We loved Ray and will be praying for Phyllis and the whole family.
Comment Share
Share via: 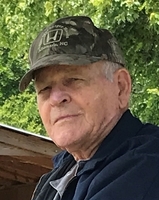