To share your memory on the wall of Richard Beasley, sign in using one of the following options:

Print
It is with great sadness that the family of Richard Clyde Beasley, of Concord, announce his peaceful passing on Friday, the 5th of February 2021, at the age of 78, with his daughter by his side.

Richard is survived by his daughter Ashly... Read More
It is with great sadness that the family of Richard Clyde Beasley, of Concord, announce his peaceful passing on Friday, the 5th of February 2021, at the age of 78, with his daughter by his side.

Richard is survived by his daughter Ashlyn Beasley Nealon and two grandchildren, Raven Piper Moon and Lily Rose. He is also survived by a sister, Libby Fletcher and husband Tom, along with four nephews and a niece in which he had a unique relationship with each. Richard also leaves behind a host of friends, including Steve and Kay Smith, Paul Ulam, Mike, as well as his beloved caretaker Tauris.

Richard is a graduate is of Camden Military Academy and Pfeiffer University with a degree in Business. Through varied careers and successes, Richard was most happy when working in the automotive industry in many capacities including painting and selling cars. He also enjoyed collecting model cars and Nascar memorabilia. Richard enjoyed fishing and the beach is where he felt most at peace. Richard was a natural prankster and loved seeing others react to his antics. The many stories of his quirky humor will always be cherished and remembered.

The family will receive friends from 4:00-6:00 pm on Monday, February 8, 2021 at Wilkinson Funeral Home.
On-line condolences may be left at www.wilkinsonfuneralhome.com
Read Less

To send flowers to the family or plant a tree in memory of Richard Clyde Beasley, please visit our Heartfelt Sympathies Store.

Receive notifications about information and event scheduling for Richard

We encourage you to share your most beloved memories of Richard here, so that the family and other loved ones can always see it. You can upload cherished photographs, or share your favorite stories, and can even comment on those shared by others.

Posted Feb 08, 2021 at 05:17pm
Beasley - Thank U for being so kind and funny when I saw u up at the Lot. U ALWAYS brightened my day and I will always remember how u treated me and my Mom after my Dads loss. U get to fly high now. God Bless U and ur family through this tough time for them but Incredible time for U.
Comment Share
Share via: 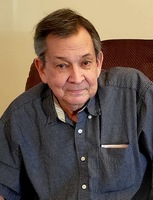