To share your memory on the wall of Paul Sigmon, sign in using one of the following options:

The family will honor Paul with a private graveside service. Paul will be available for viewing from 10am until 5pm Friday, April 3rd.... Read More
CONCORD- Mr. Paul Franklin Sigmon of Howerton Ave., passed away Wednesday, April 1, 2020 at his home.

The family will honor Paul with a private graveside service. Paul will be available for viewing from 10am until 5pm Friday, April 3rd.

Paul was born November 25, 1938 in Catawba County to the late David Livingston Sigmon and Edith Simmons Sigmon. He was also preceded in death by his wife Doris Parker Sigmon, sister Margaret Smith, and brother-in-law John Smith. Paul was a loom installer retiring from Cannon Mills and knew the mill workings inside out. During retirement, he worked at a local farm. Paul was also a member of the Pentecostal Holiness Church of the Living God in Newton.

Memorials may be made to Pentecostal Holiness Church of the Living God, 731 N. Caldwell Ave., Newton, NC 28658.
Read Less

To send flowers to the family or plant a tree in memory of Paul F Sigmon, please visit our Heartfelt Sympathies Store.

Receive notifications about information and event scheduling for Paul

We encourage you to share your most beloved memories of Paul here, so that the family and other loved ones can always see it. You can upload cherished photographs, or share your favorite stories, and can even comment on those shared by others. 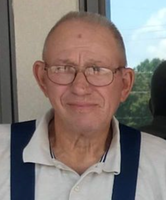